Hello Again, Teacher! A Review Of Focus On Behavior Analysis In Education: Achievements, Challenges, And Opportunities 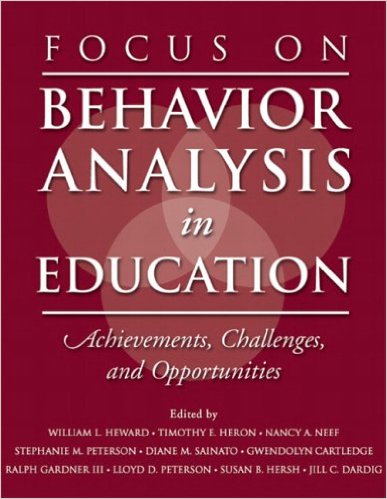 In 1968, Fred Keller, one of the early pioneers in the field of behavior analysis, published an article entitled “Goodbye Teacher.” In it, he described how applying the (then) relatively new science of behavior analysis to education would make traditional, yet inefficient, modes of teaching obsolete. Despite a great deal of initial excitement, however, very few of the methods gained widespread acceptance by educators. With all apologies to Keller, some argue that the state of affairs in education today may be better characterized by “Goodbye Behavior Analyst” rather than by the title of Keller’s article. The new book Focus on Behavior Analysis in Education: Achievements, Challenges, and Opportunities, however, makes it clear that the time is right for behavior analysts to reintroduce themselves to the field of education and to apply what they have to offer.

Edited by William L. Heward and colleagues, Focus on Behavior Analysis in Education consists of a collection of articles based on presentations made at Ohio State University’s recent Focus on Behavior Analysis in Education conference. The book covers such topics as early intervention for autism, curriculum design, teacher training, model schools, inclusion, debunking the supposed detrimental effects of rewards on learning, and the rationale behind the resistance to behavior analysis’s broader acceptance in the schools. Although it is beyond the scope of this review to cover all 19 chapters (and each is worthwhile), we will briefly describe some of them, along with their implications for current and future teachers and students.

Given the recent visibility of the use of applied behavior analysis ( ABA) in the successful education and treatment of individuals with autism spectrum disorders, it seems fitting that the book begins with two articles concerning this topic. The lead article is by the late Donald Baer, who is well known for his instrumental role (along with Wolf and Risley, 1968) in outlining the groundwork for the field of ABA. Based to a large extent on Baer’s testimony as an expert witness in cases involving the use of ABA for individuals with autism, “Letters to a Lawyer” is a synopses of Baer’s responses to criticisms and misconceptions about ABA. This concise and well written article practically serves as a “how-to guide” for making the most persuasive arguments for the use of ABA. The second article has two parts: one by Catherine Maurice, and the second by Bridget Taylor. As she has articulated in other related articles, Maurice writes eloquently about the shameful state of affairs in autism treatment, a field that is pervaded by educational policies based on pseudoscientific or anti-scientific beliefs rather than by empirically validated treatments. The article ends on a hopeful note, however, as Maurice points out that the use of science-based treatments for autism (such as ABA) is seeing a wider dissemination through the efforts of organizations such as the Association for Science in Autism Treatment (ASAT) and professional best-practices recommendations such as the Maine Administrators of Services for Children with Disabilities (MADSEC) report. In the second part of the article, Taylor describes the characteristics of effective early intervention for autism. In short, this summary of what we need to do (and why we need to do it) makes a clear argument for ABA as the intervention of choice for people with autism. The article ends with a helpful appendix outlining how to discriminate pseudoscience from actual science in assessing treatment.

Although many professionals and laypersons are aware of the benefits of behavior analysis for children with pervasive developmental disorders such as autism, less well known are the successes and struggles of behavior analysis within other areas in the field of education. These are brought to light in the articles comprising the remainder of the book. Two of these address the recent trend towards positive behavioral interventions in schools. In their article, Sugai and Homer discuss guidelines for developing positive behaviors in both students and school staff. In a similar vein, Peterson and Lacy-Rismiller assert that all the members of a school’s community must concern themselves to a greater degree with developing positive behaviors in students rather than focusing more on decreasing disruptive behaviors. Both articles are very germane given that behavior analysts frequently have to contend with the myth that their focus is exclusively on ridding children of problem behaviors.

A series of articles in the book address issues related to developing effective teachers. Regardless of educational philosophy, it goes without saying that teachers need to develop a comprehensive set of skills to be effective educators. To achieve this, training programs must be developed and refined to support the development of these skills. Maheady, Harper, and Mallette, for example, describe the implementation of a preparation program that instructs preservice teachers on how the principles of behavior analysis will allow them to be more effective in meeting the educational needs of students. In another article by Alber and Nelson, they describe how student teachers and their mentors can become contributors to the already existing body of research on best teacher practices by collaborating in the classroom. In this way, teachers can move beyond the idea that they only need to be effective consumers of research and not active contributors to our body of knowledge.

In another article, McDonough and colleagues note that the use of behavior analysis in a school should not be limited to students. A “behavioral” school must use an integrated system in which these principles are also applied across teachers, supervisors, and parents. This basic idea is further supported by Dick Malott, but at the level of the college community. In his article, he asserts that when college professors teach behavior analysis in the classroom, these principles should not only be applied by the future teachers for their students. Rather, Malott describes a behavioral-systems approach for teaching behavior analysis in which both future teachers and professors “practice what they preach.” Humorously written, the article outlines how to develop goals, manage performance, and design behavioral systems for oneself as well as for one’s students.

Many individuals in the field of behavior analysis have lamented its lack of wider acceptance. A number of possible reasons for this have been proposed. One concerns the idea that the technical jargon used in behavior analysis may be to blame. This assertion finds support in an original research article by Rolider and Axelrod. They demonstrate that laypersons view behavioral interventions in a much more favorable manner when the interventions are described in conversational language. In contrast, when technical jargon is used to describe behavioral interventions, the interventions are rated as being less understandable and less compassionate.

Another reason behind the lack of acceptance of behavior analysis may have to do with the currently popular belief in education that rewards and reinforcement undermine an individual’s intrinsic motivation to learn (Kohn, 1993/1999). In her article, Judy Cameron argues that the belief of negative effects of rewards is a broad overgeneralization that is based on a very narrow set of circumstances. She convincingly argues that a vast body of research, in fact, supports the opposite view: that reinforcement, when implemented properly, is an effective process for behavior change that typically has no negative effects for learning.

In the book’s closing article, Bill Heward argues that all the reasons for the more widespread adoption of behavior analytic practices in education are there, but that these reasons have been insufficient up to this point in time. It may be that the reasons supporting the use of behavior analysis have been outweighed by the perceived reasons against its use. Heward points out that many of the philosophical views about what educators should provide for their students contradict behavior analytic views (and empirical research!). For example, educators often oppose the practice of defining precise learning objectives for students or using science-based approaches to teaching. In addition, Heward describes how educators often see behavior analytic methods as too simplistic, too confining, and as an impediment to their creativity. Perhaps most damaging is the view of accountability adopted by behavior analysts: namely, that the student is always right! This view puts the burden of learning on the teacher and not the student. Despite these obstacles, Heward thankfully offers some suggestions for increasing the likelihood that behavior analysis will find a broader acceptance in education. Clearly, proponents of behavior analysis cannot rely solely on letting the data do the talking for them because, up to this point, this kind of wait and see approach has not worked. Heward points out that if we see behavior analysis being used effectively, regardless of who is doing it, we should reinforce it so that the practice continues to occur! Rather than taking an “us-versus-them” approach, we all need to remember that improved learning is our goal, and not which educational philosophy can claim ultimate victory.

One of the editors’ purposes for the book is for it to be used as an instructional tool in college and graduate courses. To that end, the publisher has developed a useful companion website for the text. In addition, the end of each article contains a number of study and discussion questions as well as activities for future teachers. Perhaps most exciting is that many of the actual presentations on which the articles are based can be accessed through the internet. Links to the presentations are listed in the book.

Focus on Behavior Analysis in Education is a must read for any individual who wishes to employ the most effective educational methods for their students, regardless of their students’ developmental preparedness. It should also be on the bookshelves of administrators and staff trainers who wish to see improvements in the effectiveness of their teachers. In this time of No Child Left Behind and the need for evidenced-based practice, perhaps the field of education will once again open its eyes to what a science of behavior has to offer. Focus on Behavior Analysis in Education will hopefully keep those eyes open permanently.

Kohn, A. (1993/1999). Punished by rewards: The trouble with gold stars, incentive plans, A’s, praise, and other bribes. Boston: Houghton Mifflin.