Is There Science Behind That?
Facilitated Communication 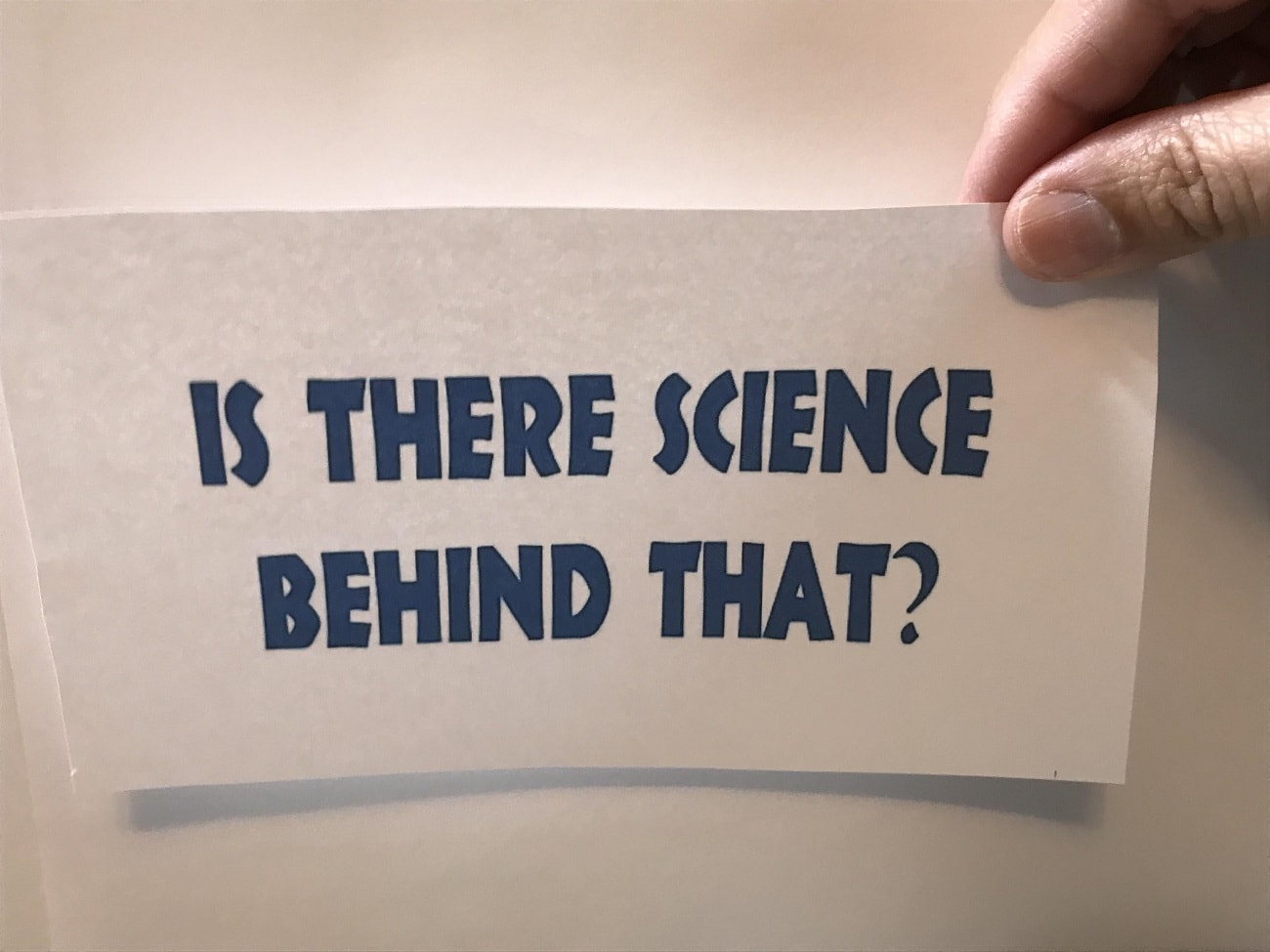 Many who work in autism and other intellectual and developmental disabilities hope that once a fad treatment has been debunked and proven ineffective, the fad loses support and disappears from practice (Frazier, 2015). Although this may be the case with most fads, some persist despite being refuted by scientific evidence (Lilienfeld, Marshall, Todd, & Shane, 2014). Most recently, Facilitated Communication (FC; Crossley & Remington-Gurney, 1992), a method proven implausible, ineffective, and dangerous in the 1990s is gaining popularity and re-emerging in practice under new names (e.g., Supported Typing, Saved By Typing, Spelling To Communicate, Typing To Communicate, Rapid Prompting Method).

With the re-emergence of FC under new names, a major issue is raised. That is, FC was first introduced and debunked almost 30 years ago in the early 1990s. It is possible that new clients, clinicians, speech pathologists, and the general public are unaware of the dangers and ineffective results of FC as a treatment for individuals with autism and other intellectual or developmental disabilities. Because FC is not dead and is in fact gaining popularity, it is important to revisit previous literature debunking FC as well as to closely examine FC procedures re-emerging with new names in order to evaluate their efficacy and to disseminate whether or not they are efficacious.

FC was developed in Australia in the early 1970s by Rosemary Crossley, a teacher at St. Nicholas Hospital, and was brought to the United States in 1989 by Douglas Biklen, a sociologist and professor of special education at Syracuse University (Jacobson, Mulick, & Schwartz, 1995). Crossley developed FC as a means for individuals who are non-verbal and intellectually disabled (e.g., diagnosed with cerebral palsy, Down syndrome, autism, or other developmental disability) to communicate with assistance from another person, called a facilitator (Jacobson et al., 1995). Specifically, FC is a procedure in which a facilitator supports the hand of an individual as the individual uses his or her index finger to point to letters on a board or strike keys on a keyboard. The letters pointed to or the keys struck spell out the intended message (Biklen, 1990).

What is the historical link between ASD and Facilitated Communication?

Biklen introduced FC to the United States with the premise that non-verbal individuals diagnosed with autism and other developmental disabilities are of reasonably normal intelligence but cannot express themselves due to the neurological condition known as apraxia (Biklen, Morton, Gold, Berrigan, & Swaminathan, 1992). Biklen referred to apraxia as a disconnect between the motor and language systems of the brain that precludes direct communication. Biklen and Crossley believe it is this disconnect which prevents individuals from independently pointing to letters or striking keys therefore requiring assistance from a facilitator. The facilitator’s purpose is to stabilize the individual’s hand movements allowing letters to be selected and the intended message to be produced without influencing the selection of letters or keys (Biklen et al., 1992; Crossley & McDonald, 1980; Jacobson et al., 1995).

In 1990, Biklen published a study in the Harvard Educational Review (Biklen, 1990) where 21 individuals who were previously unable to communicate began communicating using FC. That is, with the assistance from a facilitator, the individuals were able to type full sentences, write poetry, and express the happiness that came from being able to communicate. With this publication, FC rapidly gained support. It seemed as almost overnight the procedure was being promoted and disseminated by large universities (e.g., Syracuse University, University of Maine, University of Wisconsin Madison), used in school and home settings, and featured in the media (e.g., New York Times Magazine, USA Today, The Washington Post).

Is there any research to support Facilitated Communication?

Results of many controlled message passing and double-blind studies revealed that the facilitator was controlling the messages produced (e.g., Bligh & Kupperman, 1993; Cabay, 1994; Eberlin, McConnachie, Ibel, & Volpe, 1993; Hudson, Melita, & Arnold, 1993; Moore, Donovan, & Hudson, 1993; Moore, Donovan, Hudson, Dykstra, & Lawrence, 1993; Regal, Rooney, & Wandas, 1994; Shane & Kearns, 1994; Simon, Toll, & Whitehair, 1994; Vasquez, 1994; Wheeler, Jacobson, Paglieri, & Schwarz, 1993). Specifically, in the message passing studies, only when both the facilitator and participant saw the same object, received the same instruction, or heard the same question was the participant able to correctly respond. The participant responded incorrectly for items, instructions, and questions not seen or heard by the facilitator. In the double-blind studies, participants’ responses almost always corresponded to the facilitators’ experiences and not to their own. The evidence overwhelmingly supported the notion that FC only “works” when the facilitator is aware of the correct answer (Lilienfeld et al., 2014). The American Psychological Association (APA) summarized FC studies by stating, “The short version of this long story is that study after study showed that facilitated communication didn’t really work” (APA, 2003).

Despite the evidence, Biklen and his colleagues continued to support the validity of FC, arguing that the controlled tests were flawed (Lilienfeld et al., 2014). First, supporters maintained that the testing conditions used in controlled studies placed participants in confrontational and stressful situations, which affected their ability to correctly respond (Biklen & Cardinal, 1997; Crossley, 1994; Saloviita et al., 2014). Second, supporters proposed participants may be responding inaccurately due to difficulty communicating an exact word on command (i.e., word finding; Saloviita et al., 2014). Lastly, supporters argued that there have been some controlled studies where FC has been validated (e.g., Calculator & Singer, 1992; Cardinal, Hanson, & Wakeham, 1996; Vasquez, 1994). Jacobson et al. (1995) responded to these supporters and addressed each suggested flaw. First, Jacobson and colleagues expressed their concern with supporters stating the testing conditions were confrontational and stressful as the same participants were able to communicate in front of television cameras, at conferences and conventions, while taking examinations, and under interrogations for sexual abuse all of which are all presumably confrontational and stressful situations. Second, Jacobson and colleagues argued that although there was substantial literature indicating that individuals with autism have word finding problems with verbs, there is no literature indicating they have the same problem with nouns (Borthwick & Crossley, 1993). All controlled studies, with the exception of Simon et al. (1994), used nouns and not verbs as labels. Lastly, the limited positive reports that supporters cite to validate FC are simply not adequate enough to provide convincing support for it, in the face of overwhelming evidence to the contrary.

With the overwhelming evidence against the validity and use of FC, researchers and clinicians believed FC had been effectively repudiated. No one would continue using FC with all the evidence showing facilitators produced the messages, right? Wrong! Green et al. (2006) summarized survey data to determine the current use and acceptance (at that time) of FC. They found that 9.8% of children with autism were using FC. Additionally, the coverage of FC in the press, scholarly articles, internet and presence in academic settings was (and is) on the rise (Wick & Smith, 2009). Perhaps the most alarming survey data was reported by Schreck and Mazur (2008), who found that 6.4% of Board Certified Behavior Analysts (BCBAs) were using FC as a treatment and 5.1% believed FC was supported by research. Data suggested that those BCBAs who had been practicing for fewer than five years were more likely to report using FC than those who had been practicing for more than five years. These data are important as it suggests newer BCBAs may not be aware that FC was proven ineffective and discredited in the 1990s (Schreck & Mazur, 2008).

Researchers have hypothesized several reasons for the continued use of FC. First, Lilienfeld et al. (2014) recognized that FC is surviving because it has re-named itself. Although the names are new, the procedure is the same (i.e., a facilitator supports the individual such that they can point to letters or keys). Second, as FC’s coverage in the media and internet continues to rise, parents and clinicians may look to gain information from these sources rather than from peer-reviewed sources. The problem here is that internet and media sources may mislead parents and clinicians to believe FC is an effective type of AAC system (Ganz, Antonis, & Morin, 2018). Lastly, FC is appealing. The premise is that FC is evoking individuals’ abilities to communicate. The emotion that comes with this communication and seeing a child or client “communicate” for the first time no doubt is compelling. However, it seems as though these emotions are preventing parents and clinicians from accepting the results of scientific research and are fostering the continued use of FC (Lilienfeld et al., 2014).

There should be no further research on Facilitated Communication or this method under any different name. As numerous independent research groups have already exposed the flaws and biases of FC, research on any of these methods will likely show the same level of failure to produce positive results. Instead, consumers and treatment providers should use any number of empirically-derived, evidence-based practices to teach individuals to communicate to the best of their ability. Behavioral approaches are effective and are supported by strong empirical evidence; this should be our alternative and more compelling narrative to oppose FC. The National Autism Standards (National Autism Center, 2015) and the State of Maine (Tweed et al., 2009) are excellent sources of established (research supported) strategies to promote communication and language, such as incidental teaching, functional communication training, and Picture Exchange Communication System.

What is the bottom line?

Despite the evidence refuting FC both in the 1990s and 2000s, the procedure is still being used and is believed, by some, to be a valid treatment for individuals with autism and other intellectual or developmental disabilities. Regardless of its name, any procedure that requires ongoing support (i.e., support is never faded) from a facilitator should be opposed and rejected. FC should not be considered a valid means of communication. Furthermore, as behavior analysts, we are bound to provide evidence based and valid treatments. Facilitated Communication does not meet this criterion and therefore should not be used in practice.

American Academy of Pediatrics. (1998). Auditory integration training and facilitated communication for autism. Pediatrics, 102, 431-433. This was reaffirmed in 2009.

American Association of Intellectual and Developmental Disabilities (2019) Facilitated Communication and Rapid Prompting Method: Position Statement of the AAIDD Board of Directors.

Victorian Advocacy League for Individuals with Disability. Position Statement on the Use of Facilitated Communication.

Spelling to communicate (2018). Retrieved from: https://growingkidstherapy.com/aboutus/