There’s nothing like teaching your adolescent to drive to make you a better driver (at least according to the Department of Motor Vehicles’ standards.) It’s amazing what we, as “seasoned” experienced drivers, forget or fail to do. For example, have you noticed how far away the white stop line and stop sign are from a reasonable location to actually stop and evaluate vehicle and pedestrian traffic? The instructor at Advantage Driving School taught my son, Jason, to come to a full stop, or a “stop, bobble.” (She defined “bobble” as the momentum still in force when the car stops while your body keeps moving before bouncing gently back.) After coming to a stop bobble she instructed Jason to “count one, two. Then creep.” Seasoned drivers learn that it isn’t until one “creeps” that he can actually see what’s going on and make informed safety judgments. Who stops way back at the stop line? (Answer: people who don’t want to flunk the on-the-road test.)

Then there are the secondary road speed limits. If you respond promptly to secondary road speed limits in most cases, you are causing a major hazard. Who actually slows from 45 miles per hour to 35 mph, right where the signs are? Seasoned drivers “go with the flow,” easing into the speed limit over a smooth and controlled period of time. Those who slow abruptly risk being rear-ended. Most of us seasoned drivers can do several things at the same time. We can keep some car momentum up while concurrently scanning over our shoulder, yielding (Yield: Let the other guy go first, if there is another guy) and then merging with the privileged drivers that don’t have to worry about yielding. 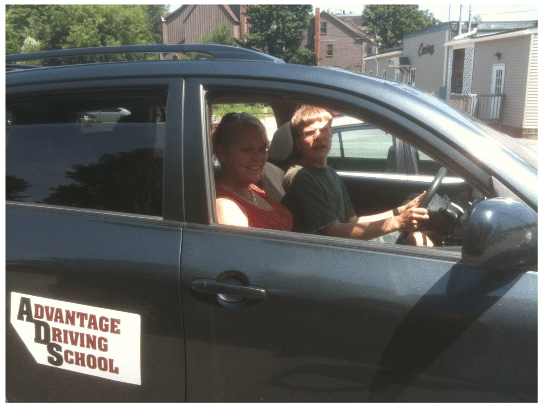 In fact, we seasoned drivers can talk on the cell, adjust the radio, scan the Garmin and drink Five Hour Energy at the same time. Adolescent, student drivers, not so much; especially an adolescent who has an autism spectrum disorder (ASD). This, I can attest to as the mother of not one, but two of them. They happen to be fraternal twins, and they became the first two clients of Providence of Maine when Jason and Joshua were seven years old. Jason, now 17, earned his Learner’s Permit in July, and well, life hasn’t been the same since. I don’t have typically developing kids, but I do recall learning to drive. My experience, while not effortless, was nothing like Jason’s. My friends and I joked “Red means stop, green means go and yellow means floor it.”

Kids with autism can be very concrete thinkers. For example, when Jason came back from his interview at Bowdoin College for an internship as a chef last week, we had this exchange:

“What did they say?”

Or, when I see Jason after school, I’ll ask “So, what did you do in Culinary today?”

Very literal thinkers, kids with ASDs can be. So when the speed limit sign says 35 mph after a 45 mph section, Jason is quick to comply.

Another interesting thing I’ve learned with Jason is how much of driving depends on non-verbal communication and environmental subtlety. Think about it: there’s the head math we do at a four-way intersection about who got there first, second, or third, and therefore in what order everyone is “entitled” to go. First In/First Out. If a driver violates that etiquette, the 7th grader still deep within us mutters “You cut!”

Sometimes it’s not clear who got there first or second. When this is the case seasoned drivers rely upon eye contact, a smile and a beneficent wave. “You go.” “No, you go. I insist.” “Ok, thank you. Hope you have a fabulous day!” At least that’s how it’s done in Maine. Jason has had to practice the fine motor skills associated with “the wave” and learn when to do it. The thing about teaching an adolescent with ASD to drive is you need to teach nearly everything. We helped Jay get his learner’s permit as soon as he was eligible because we plan to do a ton of driving with him to have that teaching time. (Another Fun Driving Fact: In Maine a Learner can remain on his permit for 18 months, and you can file for an extension. According to GEICO, our auto insurance won’t go up until Jason gets his full license or into an accident, whichever comes first). Jason’s pretty good at staying between the lines (“No honey, not the two yellow lines, the yellow line and the white line”), and rather artful at finding all the safe places in Midcoast Maine to pull over and let everyone else by so he can follow each and every speed limit sign and stop just before all the stop lines without inciting too much road rage from the seasoned drivers. Two weeks ago a pick-up truck pulled out of the Dairy Queen to cross Jason’s path, which in itself was not unusual. What was unusual for Jay—his first time—is the pick-up had a trailer behind it. That required a whole other level of judgment, timing and evasive action.

Despite his driving quirks, there are some things Jason can do like no one I’ve ever seen. He can focus. He’s in the car to learn to drive safely, and learn to drive safely is what he will do. As near as I can tell, there isn’t a lot of funny stuff going on in his head about all the “silly rules” and what he’ll do with the car the first time he’s in it without his mother or father. Jason is also what we call a “mapper.” He’s always been one. Take Jason anywhere, and he will memorize the road signs and the streets, and be able to find his way from point A to point B without fail. He just has a “sense” about direction; and, near as we can tell, almost a photographic memory.

It is that near-photographic memory, combined with Jason’s kinesthetic learning style, that are our most powerful tools in teaching Jason to be a safe driver. Once he learns it, whatever “it” is, he owns it. He’s good at it. He doesn’t look back. You should try his Corn and Cashew Nut Curry.

As the parents of two kids with autism who are now (be still, my heart) young adults, my husband, Steve, and I are committed to doing everything we can to help them be as independent and self sufficient as possible, just like all you other parents out there! Our journey is just a little less conventional.