I have an adolescent with autism in my class who responds negatively when people say certain words. He seems to have a sensitivity to them and may respond with a behavioral outburst. Have you heard of this happening with other students with autism and do you have any thoughts on intervention? 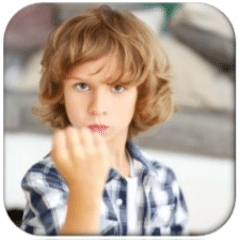 This negative response to certain words, or “trigger words,” that you describe can be a real problem for individuals with autism and their families. Individuals with autism may react to a particular word or set of words when they are said by familiar and unfamiliar people in their environment. The way in which they react may vary and can range from verbal protesting or body tensing to an extreme behavioral outburst including aggression, self-injury or destructive behavior. This response to trigger words can have a great impact on the person’s ability to interact with others, participate in social situations, and be involved in the community or at a job site.

As with any behavior, it is important to assess the situation to be better able to provide an appropriate intervention. The function of the problem behavior can be assessed through a functional behavior assessment (FBA) (Alter, Conroy, Mancil, & Haydon, 2008). Function of behavior can be determined through interviews, structured observations and the collection and analysis of data to identify patterns in the behavior. Data can also be recorded on possible trigger words to determine the frequency, intensity and latency of behavior in response to various words (data collection considerations will be shared later).

If you have already conducted an FBA and determined that the trigger words have frequently been the antecedent to the behavior of concern, the question then becomes why do these words serve as an antecedent to this behavior? While it is true that there may be a reason, it is not always apparent what the reason is. For example, it may be that the student had a history with denial of a reinforcer paired with a specific word such as “later,” or demands were consistently paired with words such as “Let’s go.” In these cases, the words could have become aversive to the student through frequent pairings. However, you may not be able to determine what caused the word to become a “trigger word.” While knowing the history can be helpful for preventing future trigger words from developing, it is still possible to treat the behavior without knowing the initial reason the word became an antecedent for challenging behavior.

To further assess, you may want to observe how the student responds to the trigger word in various conditions. For example, you can analyze the occurrence of behavior based on who says the word (familiar or unfamiliar person), if it is spoken directly to the student or overheard, the setting in which the student reacts to a trigger word, and the ongoing activity (preferred or non-preferred). You can also assess the student’s reaction to various forms of the word (written word, spoken word, word in a sentence) to help plan for desensitization training. One can also assess whether a cumulative effect is observed (i.e., the first instance of the trigger word does not occasion the behavior; however, multiple instances of the trigger word cause the student to react). All of these factors can be reflected as columns on your ABC data sheet.

Comorbidity. The complexity of this behavior requires us to look at other factors that may affect its occurrence. Considerable evidence suggests that children and adolescents with autism spectrum disorders (ASD) are at increased risk of anxiety and anxiety disorders (Ghaziuddin, 2002) and this may worsen during adolescence. Children with autism may display problematic emotional reactions and behaviors when faced with social situations (Lainhart, 1999). It is important to consider the possibility that the trigger words function as stimuli that increase the student’s anxiety. Behaviors associated with anxiety can appear on your ABC data sheet.

Researchers are attempting to study co-morbidity in individuals with autism. Leyfer et al. (2006) studied various disorders associated with autism. They found that specific phobia was the most common disorder (in 44% of participants) found in individuals with ASD, and even higher prevalence rates have been reported in other studies (Muris et al., 1998). There are a number of specific phobias that relate to words, including nomotophobia (fear of names) and verbophobia (fear of words). Onomatophobia is an irrational or compulsive fear of hearing certain words. However, there is little research on this phobia and no research in relation to individuals with autism to date.

The second most frequent disorder found in the study was obsessive compulsive disorder (OCD), diagnosed in 37% of the children with autism (Leyfer et al., 2006). The most common type of compulsion was a ritual involving others. About 50% of the children diagnosed with OCD had compulsions that involved others having to do things a certain way. Examples included:

What was most interesting about the findings is that the two most frequent compulsions involved attempts to control the behavior of others. Given this, it is plausible that for some children with autism and OCD, the problem behavior that occurs in response to the trigger words may be attempts to control what is said by others. However, again, no research specifically addresses trigger words as an antecedent to behavior in children with OCD or autism.

Prevention. Often the first reaction to increased problem behavior in response to trigger words is to prevent the behavior from occurring by avoiding the antecedent entirely. Therefore, adults may refrain from saying trigger words or reacting negatively to trigger words when they are spoken. However, the issue in this case is that it is not so easy to simply remove the antecedent from the environment. First, it is unlikely that someone can truly remove a word from their vocabulary consistently. Second, outside of the small circle of family and therapists, there are many people the individual will come in contact with whose behavior is not easily controlled.

Predictability and preparation. Predictability and preparation may be more viable options in reducing behavior. Predictability can be used by letting the individual know that the word is going to be used, similar to how you would warn a student with autism that the fire alarm is going to ring if preparing him for the aversive stimulus. This can be done verbally or with a non-verbal signal or visual cue. This warning may be one part of an intervention package. Preparation can also be used to prepare the student for when he/she is going to be in a community location where it may be likely that the student will hear a trigger word. For example, a student may choose to wear headphones while in the community.

Generalization. We know that newly acquired responses may be controlled not only by the original stimulus but also by others resembling those stimuli (Stokes & Baer, 1977). Therefore, it is possible that the problem behavior may generalize from the original trigger word to new but similar words. As a result, assessing responses to similar words could also be important so that generalized words can also be included in treatment from the onset. Generalization can also occur from one person to another and to novel settings, which could be considered during assessment.

Systematic desensitization/exposure. The student may be able to learn to better tolerate the trigger words through systematic desensitization (Grös & Antony, 2006). In this behavioral intervention, the student is gradually exposed to the stimulus through a hierarchy of antecedents that increase in aversiveness based on the individual’s behavioral response to the various steps. For example, desensitization may begin with the use of technology in the form of video or a virtual environment in cases where this presentation is more tolerable for the individual (Mager, Bullinger, Mueller-Spahn, Kuntze, & Stoermer, 2001). Providing reinforcement for successfully tolerating aversive stimuli is a key component of this procedure.

Sample desensitization steps for a student:

Functional communication training. Functional communication training (FCT) has been a highly successful approach for replacing challenging behavior with communication in students with ASD. As an example, Rispoli, Camargo, Machalicek, Lang, and Sigafoos (2014) demonstrated the effectiveness of FCT with students with ASD for behavior that was ritualistic in nature. It may be possible to teach the student some form of communication that may help him or her to communicate rather than engage in challenging behavior when a trigger word is heard. The individual may not be able to completely avoid hearing trigger words, but may be able to ask to leave a particular area, such as a crowded area with high probability of trigger words.

When working with a student with ASD engages in behavior related to trigger words, it will be important to acknowledge the complexity of this behavior. Consider conducting a thorough and ongoing assessment to determine the most appropriate interventions to best meet the needs of the individual, while always remembering the importance of data collection and data analysis to help guide decision making.

You may be interested in this article from the Association for Science in Autism Treatment:
Problem Behavior Triggered by Specific Words

This is the link:
https://asatonline.org/research-treatment/clinical-corner/problem-behavior-triggered-by-specific-words/