Avoiding the Pitfalls of Circular Reasoning

Introduction: What is Circular Reasoning?

Circular reasoning, or “begging the question,” occurs when an argument doesn’t “go anywhere” because the “reasoner begins with what he or she is trying to end up with” and “in circular reasoning, there is no progress (Dowden, 1993).” We often hear people say, “He does that because he has autism.” To say that someone does something because they have autism is to say that the autism itself, as an overarching diagnosis, causes the behavior to occur, as if it is a fixed relationship (if autism, then that behavior). An argument can be made to justify this, although it is a weak one, such as “the neurological underpinnings that are revealed through the behaviors characteristic of autism (such as hand-flapping) are creating an impulse to engage in that behavior.” However, this logical fallacy is set up with circular reasoning (if autism, then that behavior if that behavior, then autism; or A→B ∴ B→A. It is dangerous, and wrong. While someone with autism may engage in certain behaviors, their diagnosis certainly does not determine their behaviors, nor vice versa, and this reasoning constrains what can be done to improve their behaviors and overall outcomes. 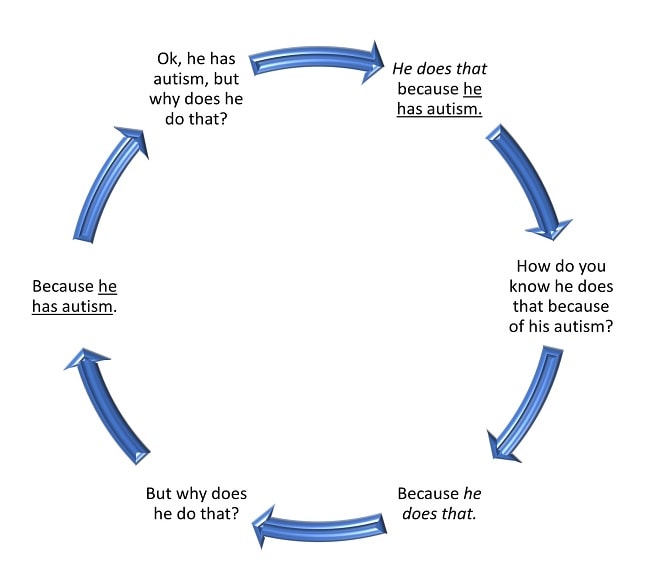 Why is circular reasoning dangerous?

Where does this justification end? Can we say, “He just isn’t good at that because of his autism?” I would hope not! Such reasoning may lead to decreased learning opportunities to target skills that are well within the potential repertoire of an individual. Moreover, can we make assumptions about understanding, such as “He doesn’t ‘get it.’ He has autism.”? Again, one should hope not. This is likely not truly representative of this person. In fact, it is often true that a person with autism understands a great deal more than we might acknowledge. In my years of experience, I have discovered extremely clever ways that individuals with limited vocal expression have made their understanding of the world known. One extraordinary example was that a young boy one day, seemingly randomly, put a sticky note up in his kitchen that said, “RIP Eric Garner.” His parents had no idea that he had been listening to conversations or television programs related to this man’s death, nor that it would have made an impact on his life. It was then that his team began to grasp the depth of his understanding of the world around him.

Professionals or caretakers contribute unintentionally to circular reasoning (or fall prey to the circular reasoning employed by others around them), which can impact decisions made on behalf of an individual with autism (e.g., treatment, services, potential, and- more broadly- their future). As stated above, if someone believes that a person “can’t” because they have autism, they will not provide supportive interventions or treatments that may develop that skill.

What are some ways that circular reasoning impacts decision making?

Nathan Palmer (2012) wrote eloquently and transparently about his personal experiences with self-fulfilling prophecies in education and how people that cared about him simply told him, “You’re just not a good writer.” As someone who is writing for Sociology in Focus after having been diagnosed with a learning disability throughout his time in the education system, it is clear that he overcame assumptions that were being made about his skills and potential.

In this article, Palmer also reviews an interview with Dr. Robert Rosenthal by Alix Spiegel (2012) for National Public Radio (NPR) and the NPR Health Blog. Dr. Rosenthal described an experiment that he and Lenore Jacobson conducted in the 1960s. Teachers were led to believe that select students performed highly on a particular measure of intelligence, one that showed that they were expected to “experience a dramatic growth in their I.Q.” This designation that certain students should be expected to have sudden increases in their intelligence was assigned to students entirely at random and was based on a fake test. However, those students were treated differently, and most importantly, teachers expected that these students were “smart” or “gifted.” Teachers gave these students better feedback, higher quality teaching, and even smiled at them more. Then, these students performed better in a future assessment of their intelligence. So, what happens if we believe the opposite – that someone cannot do something or that they are not capable? It is easy to imagine the unfortunate outcomes in that situation. Teachers and other providers may reduce their efforts, and it is easy to imagine the regrettable consequences in that situation.

Recommendations for next steps

Let me be perfectly clear – having autism is never a reason that someone cannot do something. People with autism, although they may engage with the world differently than neurotypical people, have all the same potential as anyone else. Are there individuals who have what is called “severe autism” or “autism with intellectual impairment?” Yes. However, there are still a tremendous amount of skills that this person can learn, even if it takes longer or necessitates a different teaching approach. How awful is it that any person should miss opportunities to learn as much as possible and achieve as much as they can because the people around them didn’t think that they could? Any seasoned educator or behavior scientist likely knows of many students who made unimaginable strides far beyond anyone’s expectations of them.

A common “dead end” circular reasoning statement that some may say about autism is that “People with autism don’t socialize well.” Are deficiencies in social skills part of what may lead to an autism diagnosis? Yes. However, people with autism certainly can learn to socialize, such as the review in this article, where children were provided with interventions aimed at teaching play skills with their peers in school. The authors, Kasari, Rotheram-Fuller, Locke, and Gulsrud (2012), examined two interventions and found that combining these led to measurable increases in children’s play behaviors with peers on the playground, as well as better perceptions of the students with autism from their teachers. Below, essential skills are highlighted, along with how circular reasoning may be harmful and how to consider the skill logically.

It is vital that professionals and caretakers begin with clear, logical reasoning for why an individual isn’t currently doing something, isn’t performing as expected, or is doing something that is seen as “dysfunctional.” Even that word must be used loosely, as there are many behaviors that individuals engage in that serve their function perfectly, even if those behaviors are upsetting or concerning to those around them. For example, a person with autism with limited vocal communication may engage in yelling anytime a person takes away their iPad, which causes the person to give them their iPad back (or take it away less often). The other person may wish that the person with autism didn’t yell, but they are essentially teaching the person with autism to yell, and that is why it continues to happen. What would be called “dysfunctional” is truly functional for the purpose of the person getting their iPad back. If the people in the environment were simply responding differently, the person with autism would likely behave differently- just as every person on Earth behaves differently given changes in the environment.

Likewise, teachers and professionals should not say, “He just isn’t getting it,” when the way in which they teach something isn’t leading to someone learning something. In fact, they are getting it. They understand- from the way you’re teaching- to continue to respond the way they are. The statement “If a child doesn’t learn in the way we teach, we change the way we teach,” sometimes attributed to Ignacio Estrada and other educators, is revolutionary because it simply places total responsibility of what someone learns on the way it is being taught, not on their ability to learn. In that, we have clear, logical reasoning. Rather than “He does that because he has autism,” which is circular and leads to no growth or progress, we instead have “He does that because he has been taught to do that, or hasn’t been taught not to do that (if taught, then that behavior if not that behavior, then not taught to do that; or A→B ∴ -B→-A).” In this case, if we say, “He doesn’t do that because he didn’t learn to do that,” or “He was taught to do that, so he does that,” we can easily say, “Ok, so let’s teach it differently.” This will lead to greater consistency in treatment, and the beliefs held about people with autism; that they are capable of learning- perhaps in different ways that we need to learn to teach– and that they should never be limited in what they can do by beliefs that “autism causes” them to “do/not do” anything.

You may be interested in this article from the Association for Science in Autism Treatment:
Avoiding the Pitfalls of Circular Reasoning

This is the link:
https://asatonline.org/for-parents/becoming-a-savvy-consumer/pitfalls-of-circular-reasoning/