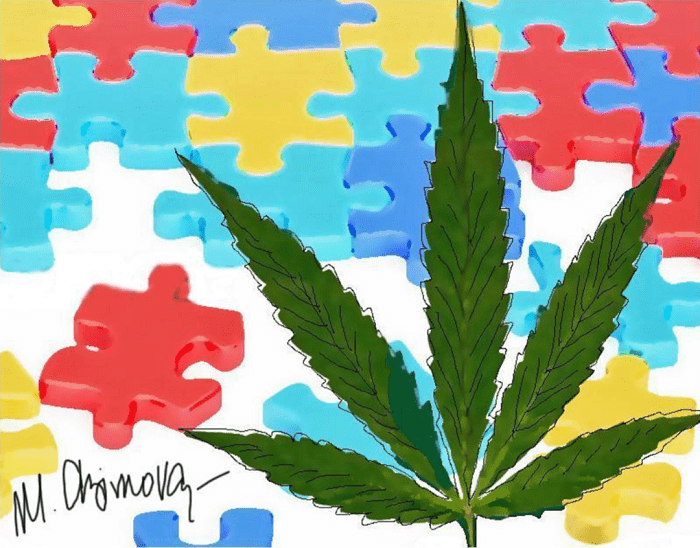 Description: Marijuana is comprised of the dried flowering tops and other parts of the cannabis plant, or a resinous extract of it (cannabis resin) which can be smoked or consumed as an edible. Cannabinoids, the chemical compounds within the plant, produce the effects associated with marijuana and include tetrahydrocannabinol (THC) and cannabidiol (CBD). THC is associated with psychoactive properties and produces the “high” people feel when smoking or consuming it. CBD on the other hand, is not psychoactive. The use of cannabis for a wide range of medical conditions has changed significantly in the United States and around the world over the past 20 years. Numerous states as well as other countries, such as Canada, have legalized the substance either in its true form or as a cannabidiol for a variety of purposes, including medical and recreational. Families of individuals with ASD may encounter a vast amount of information on the Internet which can be confusing, particularly for those looking for a quick fix or a cure. Our hope is that this treatment summary will provide guidance to help families and professionals make decisions and recommendations that are based on the most current scientific evidence.

Research: While there have been some research studies to support cannabis use for various conditions in adults such as central pain syndrome, spasticity, social anxiety, and epilepsy, as well as treatment of convulsive and drop seizures in children with Dravet syndrome and Lennox-Gastaut syndrome, there is currently no strong scientific basis to supporting their use for treating the core symptoms of ASD (Aggarwal, Burke, & Maddux, 2019; Duvall, Lindly, Zuckerman, Msall, & Weddle, 2019; Hadland, Knight, & Harris, 2015; Kidd, 2018). Only a small number of scientific studies have examined the use of cannabis in ASD treatment, and none of them were double-blind, placebo-controlled randomized clinical trials. Among the small body of research that exists are studies noting retrospective and/or inconclusive support (e.g., Aran, Cassuto, Lubotzky, Wattad, & Hazan, 2019; Kurz R, Blaas K, 2010; Pretzsch, Freyberg, Voinescu, Lythgoe, Horder, Mendez, et al; 2019), studies that rely solely on parent report without a reliable measurement of behavioral outcomes (e.g., Bar-Lev Schleider, Mechoulam, Saban, Meiri, & Novak, 2019), and studies that cite animal research that does not necessarily translate into clinical trials with humans (e.g., Foldy, Malenka, & Sudhof, 2013; Onaivi, Benno, Halpern, Mehanovic, Schanz, Sanders, et. al., 2011). Taken together, these studies do not provide strong evidence of effectiveness and safety of cannabis use or its components for treatment of the core symptoms of ASD or its comorbidities, with the exception of certain types of epilepsy (e.g., Sulak, Saneto, & Goldstein, 2017).

A factor that must be considered by family members is the potential for side-effects. A large number of parents reported adverse side-effects associated with the use of CBD such as worsening sleep, restlessness, irritability, unexplained laughter and hyperactivity, loss of appetite, fatigue, mood changes, gastrointestinal symptoms, and on one occasion a serious transient psychotic event was reported (Aran et al., 2019; Bar-Lev Schleider et al., 2019; Duvall et al., 2019; Kuester et al., 2017). Also, children and teenagers who have been exposed to cannabinoids are at greater risk for developing depressive-like symptoms and psychotic episodes later in adulthood (Kidd, 2018; Rubino & Parolaro, 2016). The National Academies of Sciences, Engineering, and Medicine released a report in 2017 following a review of thousands of scientific abstracts from marijuana health research and offered several conclusions, among which were: use of cannabis and its products can have negative side effects, such as impairments in learning, working memory, and attention; as well as negative impacts on employment and social outcomes. These conclusions were also supported by Agarwal et al. (2019) and Kidd (2018).

There are also several limitations to these studies such as attrition (participants dropping out of the study), lack of control for confounding variables, lack of control groups, and, arguably the most problematic of the limitations, the lack of any objective assessment tools used to measure outcomes (Barchel et al., 2019). This means that the conclusions were largely based on rating scales and questionnaires (i.e., subjective measures) and not on direct observation and direct measures of behavior change. Thus, it cannot be concluded that any stated improvements, however small, can be attributed to the use of cannabis.

Recommendations: Currently, there are no high-quality peer reviewed scientific research studies that demonstrate the efficacy and safety of cannabis or any of its components to treat the core symptoms of ASD. Evidence and information are currently coming from sources that are not scientifically supported (such as testimonials), studies that report benefits in other diagnoses and health difficulties, such as epilepsy and spasticity, and studies that have numerous limitations. Research is urgently needed not only to determine whether there are any medical benefits of marijuana-based products in reliable doses specifically for the treatment of the core symptoms of ASD, but also to assess its safety for use with children, whose nervous systems are still developing.

National Academies of Sciences, Engineering, and Medicine. 2017. The Health Effects of Cannabis and Cannabinoids: The Current State of Evidence and Recommendations for Research. Washington, DC: The National Academies Press. https://doi.org/10.17226/24625

Related Position Statements and Warnings (not all are specific to ASD):

AAN Position: Use of Medical Marijuana for Neurological Disorders
The American Academy of Neurology does not support medical marijuana use due to safety concerns, particularly pediatric patients and patients with nervous system disorders. They state that the few studies that do exist are not well designed and have a small sample size. This statement was originally drafted in 2014 and updated in 2018.

AAP Position: American Academy of Pediatrics Reaffirms Opposition to Legalizing Marijuana for Recreational or Medical Use
The American Academy of Pediatrics opposes medical marijuana outside of the regulatory process of the US FDA. Accounts that certain marijuana compounds could benefit some children with chronic life-limiting, debilitating conditions are largely anecdotal, and more research is needed for pharmaceutical cannabinoids. This statement was originally published in 2015.

The American Medical Association states that there is a need for more well-controlled studies on medical marijuana use in general and calls for more research assessing the consequence of long term cannabis use in children and adolescents.

The American Society of Addiction Medicine supports the use of  medicinal marijuana only when governed by appropriate safety and monitoring regulations, such as those established by the FDA research. However, it cautions consumers to possible adverse side effects of its use.