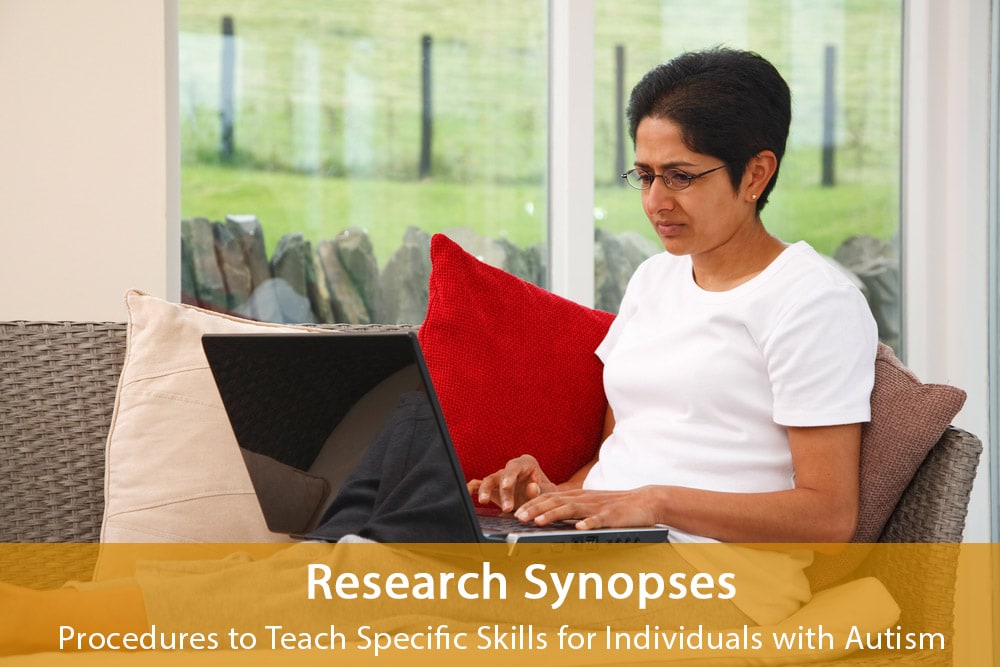 Play is a highly important activity for child development. Through play, children become motivated to learn, and advanced play skills are associated with increases in cognitive abilities and language. Children with autism show deficits in play skills as compared to neurotypical peers. Specifically, children with autism tend to focus on objects during play rather than on the peers they are playing with (Adamson et al., 2009). This results in a lack of symbolic play, which is the ability to pretend that objects are other objects and to bring inanimate objects to life within play scenes. In this study, Chang et al. set out to examine symbolic play skills across different contexts in children with autism after participating in a six-month play intervention, specifically the JASP-EMT naturalistic communication intervention, which stands for Joint Attention Symbolic Play Engagement and Regulation plus Enhanced Milieu Teaching. By introducing augmentative communication devices in some of the JASP-EMT sessions, the authors were also able to investigate the association between language abilities and symbolic play in children with autism.

Fifty-eight children with autism, between the ages of five and eight, participated in the current study. All participants had significant language deficits demonstrated by a word count of less than 20 spontaneous novel words emitted in a 20-minute naturalistic language sample observation. Participants were randomly assigned to one of two groups, JASP-EMT (without an augmentative communication device) or JASP-EMT+AAC (with the addition of an augmentative communication device). JASP-EMT is a naturalistic play intervention with the goal of teaching joint attention, symbolic play, and social use of language during child preferred play activities. Both groups of participants engaged in JASP-EMT sessions for one hour once a week for three months. After three months, participants who showed little improvement increased intervention to three times per week. Data on play skills and language were collected through structured play assessments conducted at entry (0 months), midpoint (3 months), and exit (6 months). Assessments were conducted by blind examiners who introduced five sets of toys to each participant with the goal of eliciting spontaneous play acts. Play acts were categorized into four levels of play based on a typical developmental sequence: simple play, combination play, pre-symbolic play, and symbolic play. Communication was also transcribed during the structured play assessments in order to calculate the frequencies of spontaneous communicative utterances and different word roots emitted during each assessment.

Results showed overall improvement in play skills after JASP-EMT intervention for both the no-AAC and the AAC groups. In baseline, most participants showed play skills at the combination play level, which is characterized by putting play objects together, such as in a shape sorter. After 6 months of treatment, increases in pre-symbolic and symbolic play acts were noted in both groups. No differences were found between the two groups of participants except that children in the AAC group showed increases in the diversity of their play acts when engaged in simple play. Since simple play is at a developmental level lower than the baseline level at which most participants entered the study, the authors deemed this finding insignificant. No differences were found between the groups, with regard to either play skills or language skills, at the level of symbolic play. Statistically significant improvements in symbolic play were achieved for both groups after six months of intervention.

What are the strengths and limitations of the study?

There are several strengths to the Chang et al. study. First, the study investigated the play skills of elementary-aged children with autism. Many studies on play skills investigate treatments using early intervention or pre-school aged children with autism. This study showed the effectiveness of a play intervention on somewhat older children. Second, the study demonstrated the effectiveness of a relatively low-intensity treatment on increasing symbolic play in children with autism. JASP-EMT sessions were only conducted one to three times per week for one-hour sessions. A third strength of the study is that it re-confirmed previous findings that symbolic play can be taught to children with autism (Charman & Baron-Cohen, 1997; Hobson et al., 2009; Jarrold, 2003) and that improvements in play skills are correlated with improvements in language and other developmental skills (Pierucci et al., 2015). There are, however, some limitations worth noting. First is the lack of a control group in the study design. Without a control group, improvements in play for both experimental groups may potentially be attributed to simple maturation instead of to the JASP-EMT intervention. The authors offered a rationale for why maturation was unlikely to have been a factor, however, the lack of a control group is a significant design flaw that could have been avoided. A second limitation of the study is the lack of generalization data. Although the authors were able to demonstrate generalization of skills to novel experimenters within the structured play assessment sessions, there was no attempt to collect data in natural settings such as home and school.

Citations within the synopsis:

You may be interested in this article from the Association for Science in Autism Treatment:
Symbolic Play in School-Aged Minimally Verbal Children with Autism Spectrum Disorder

This is the link:
https://asatonline.org/research-treatment/research-synopses/symbolic-play/