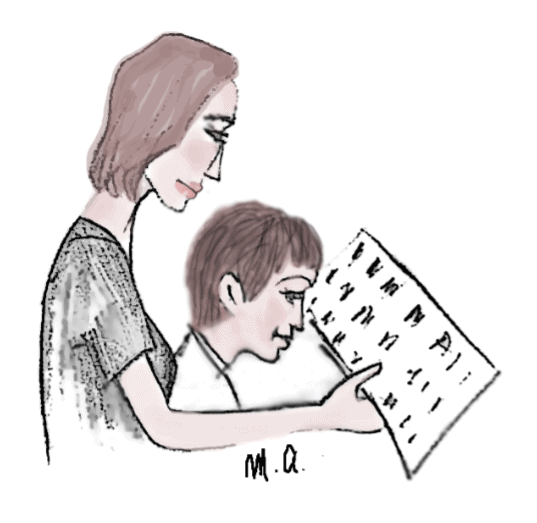 Rapid Prompting Method (RPM), was developed by a parent of a child with autism in order to teach communication through a system of quickly delivered prompts, meant to match the rate at which a student might engage in stereotypic behaviors. Although originally developed for individuals with autism, the developer of this approach has stated that it can be applied more broadly. The rationale behind RPM is to compensate for the behaviors in which a child might engage if competing tasks are not constantly prompted. Simply put, the practitioner attempts to deliver instructions at a rate that competes with stereotypy and encourages attention to the task. In practice, RPM resembles the treatment, Facilitated Communication (FC). RPM providers utilize a letter board and eventually handwriting paired with sensory (auditory, visual, and tactile) prompts to encourage students to respond to questions and learning opportunities. Other similarities to FC involve the proposition that the learner possesses some “latent abilities,” which the intervention will demonstrate (e.g., Tostanoski, et al., 2014). For a more detailed comparison of FC and RPM, please read the 2018 position statement of the American Speech-Language-Hearing Association.

Research Summary: In 2014, Chen et al. conducted a study exploring the effects of RPM on joint attention skills and repetitive and stereotypic behaviors. While their findings included reductions in the stereotypic behaviors, a response by Lang et al. that same year highlights several methodological flaws which call the results into question. Among these flaws were the inclusion of a hypothesized mechanism for the changes in behavior (rather than an observable, measurable manipulation) and a lack of information about the procedure. These flaws led Lang to conclude that the changes in participants behavior were not likely due to the RPM intervention and further, that the data demonstrated that RPM actually created a dependence on prompts to evoke responses, Later, in a systematic review of the scientific evidence supporting RPM (Schlosser, et al., 2019), researchers found that previously conducted studies of RPM (of which there were six) did not meet the standards and scientific rigor required to consider it an evidence-based treatment. Several of the studies addressed comprised of descriptive or ethnographic studies, meaning they fail to demonstrate that it was the use of RPM specifically which led to positive outcomes. In other cases, the practitioners did not verify that procedures used were synonymous to the methods of the RPM developers. Ultimately, the systematic review concluded that no studies conducted on RPM up to 2018 provided evidence for its effectiveness. It was termed an “empty review” (Schlosser, et al., 2019). Prior to the above review, Deacy, Jennings, and O’Halloran (2016) attempted to conduct a review of RPM. These authors suggested that data provide evidence for the claim that RPM has a beneficial impact on the symptoms of autism; however, there were a number of methodological flaws. Schlosser et al. (2019) argued that this 2016 review was not systematic due to unclear review questions and inclusion and search criteria, no information about the design of included studies, no scientific appraisal of the evidence provided, and failing to identify conflicts of interest with regard to funding sources.

Recommendations: While the lack of evidence from previously conducted studies does not necessarily indicate that RPM is not effective at developing communication skills and reducing stereotypic behaviors in learners with autism, use of this intervention should not be used or recommended by practitioners until the claims made can be substantiated by peer reviewed research studies. These studies should include clear and measurable target behaviors, unambiguous descriptions of the interventions used, and experimental designs which demonstrate control of the behaviors by the intervention. Two professional organizations: American Association of Intellectual and Developmental Disabilities and the American Speech-Language-Hearing Association, have issued position statements advising against its use. Interventions which are recommended for treating autism, specifically targeting communication skills, include the Picture Exchange Communication System, Augmentative and Alternative Communication (AAC), Verbal Behavior, Functional Communication Training, Incidental Teaching, Pivotal Response Treatment/Natural Language Paradigm, Discrete Trial Instruction, and other behavior analytic teaching procedures.

You may be interested in this article from the Association for Science in Autism Treatment:
Rapid Prompting Method (RPM)

This is the link:
https://asatonline.org/for-parents/learn-more-about-specific-treatments/rapid-prompting-method-rpm/