An Interview with Alexandra Penzi

Interview With Alexandra Penzi, Sibling of Christopher and Advocate of Autism Awareness 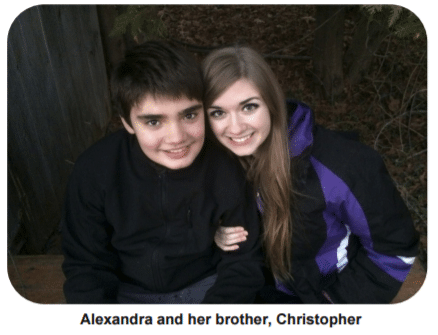 Springtime for high school students is a very busy time. There are college visits, proms, and making plans for the summer. For one extraordinary teen, spring is also the time for Autism Awareness in April. Alexandra Penzi, age 17, has a special interest in autism awareness because her brother Christopher, age 13, is diagnosed with Autism spectrum disorder. To Alexandra, autism is “a condition that can be a heartache to the family, who simply wants to see their child flourish in society and hopes for their ability to someday be independent and take care of themselves.” Alexandra gets involved with Autism Awareness by selling blue bracelets for her school’s Key Club (division of Kiwanis). Alexandra also tries to get her friends involved. As copresident of the National Art Honor Society at Manhasset High School, she collected art piece donations for raffling at the EdenII/Genesis Outreach Program, the school her brother attends.

Alexandra says growing up she “wasn’t quite sure” when she was formally told that her brother had autism, but it seems as if it was always a part of their lives. She remembers being around 8 or 9 and thinking that Christopher “was going to get better, because multiple therapists would tell me that he’s going to be cured in a few years, and other people told me that he would outgrow it.” Because of this, on every birthday Alexandra would blow out the candles on her birthday cake and make a wish “that Christopher would be cured of autism.”

Alexandra was kind enough to take time out of her busy schedule to be interviewed about her experience having a brother with autism.

May: What was one thing that changed after learning that your brother had autism?

Alexandra: I just loved him even more, and I kept hoping and praying that he would be cured miraculously one day. I was scared for him, and the way people would treat him, and if he would ever have a normal life. I wondered if I would ever be the fun aunt I had always planned on being, and I wondered if he was ever going to get married and have a family of his own, or if he would be able to have a job, or if he would ever have any friends, or if I would ever be able to joke and interact and talk and play games and quarrel and do other things with him that all my other friends were able to do with their siblings and took for granted. I felt guilty that I wasn’t spending all my time with him, and I felt guilty when I was with friends because I knew that he didn’t have any. Whenever we would try to include him on playdates, he wouldn’t interact, and my friends would get really bored – I even lost some friends because they didn’t want to come over to play with him.

May: What remained the same after learning that your brother had autism?

Alexandra: I still loved him, more than anyone else. I loved him even more fiercely. Our lives continued going on the way that it had for the most part – new therapists would come and go in my home; there was never any continuity or long term commitment from any of them-to the point where seeing strangers in my home was commonplace, but other than that, as a child I didn’t really pick up on major changes in our daily life.

May: How did you find out about the Association for Science in Autism Treatment (ASAT)?

Alexandra: My brother’s consultant, Dr. Mary McDonald, told us about ASAT and how I might be able to promote it to individuals and families that needed information on autism to better educate themselves. I wanted to provide people with an accurate and honest organization – ASAT that was knowledgeable about autism, providing sound and science-based information and strategies for families. When I was making bookmarks for April’s Autism Awareness Month, I thought it would be the perfect opportunity to get the word out in my school and community.

May: When did you start to get more involved in autism awareness?

Alexandra: After a few ugly scenes where people didn’t seem to understand Christopher had a disability, and would say horrible things about him, such as how they “would punish him if he was their child,” and about my parents, “poor job raising him,” I was really upset. Many of those instances will never be forgotten. I remember when one time at Walmart, Christopher was having a meltdown and a woman walked by and said that if he was her kid she would “slap the s#*% out of him.” Another time, when Christopher was having a scene outside of a pet store, a man walked inside and said that the kid outside was a “*%$&@¡ animal and should be locked up” and “if he was my kid I would beat the *%$# out of him,” as well as a few comments that were even worse. One day I was singing in the church choir, and the director’s assistant asked my parents to take my brother out of the church after he had clapped his hands in excitement after I finished singing a song. This was on Christmas Day, a day I will never forget. These were just a few instances, out of a myriad, and I was getting really fed up with the way people would discriminate and treat my brother. It sickened me, and I became really disgusted with people. I wanted to spread more awareness so that other families, as well as my own brother, would not have to suffer mistreatment from ignorance any longer.

May: Tell me about the fundraiser where you will be selling blue bracelets for your school’s Key Club?

Alexandra: Every year since ninth grade I have participated in selling bracelets for autism awareness at my school. The money raised goes to support a job agency that has employed many autistic children from my school and surrounding areas. This year, when I heard that the bracelets were being sold once more, my friends and I immediately signed up to sell the bracelets during our lunch period. We quickly sold out, and decided to throw our own bracelets in for resale, to raise more money! It was so heartwarming to see people genuinely excited to support our cause, including some people that came as a surprise. Very encouraging!

May: Besides the National Art Honor Society, what else are you involved with at school?

May: What do you like to do after school and on the weekends?

Alexandra: After school, normally I’m doing homework and studying (it seems like it never ends!!). In spare moments of leisure time, I love drawing, writing, reading, going on Pinterest to find new craft ideas and recipes, cleaning my room (bet you weren’t expecting that one, mom!), and hanging out with my friends. I also volunteer at a local hospital and spend time with my brother. Other activities that I enjoy doing (but don’t seem to get much time to do them) are scuba diving, fly fishing, and ballroom dancing.

May: What would you like to do after high school and why?

May: What other events have you participated in or ran for Autism Awareness?

Alexandra: Besides the bracelet fundraiser at school, I have made and collected artwork from members of the National Art Honor Society to donate for fundraising at the Genesis/Eden II program for autistic individuals in East Meadow, NY. As previously mentioned, I have also designed bookmarks for April’s Autism Awareness Month for distribution in my Middle School and High School libraries as well as our community Public Library.

May: Is there anything else you would like us to know?

Alexandra: There are many students interested in this cause at my school, and we would gladly welcome any guest speakers or other information from your organization on autism at any time. Also, I would be more than willing to help out with anything you might need in my area to help spread awareness and more importantly education on autism.

May: Thank you immensely for sharing your experiences with Science in Autism Treatment and our subscribers!